The 007-1MS silphenylene columns offer the chromatographer a number of advantages:

Don't see a length or film thickness that you require?

Contact us - we do custom configurations all the time!

Traditional polysiloxane-type GC stationary phases degrade at elevated temperatures. The degradation process is well documented and consists of the thermal rearrangement of the siloxane backbone to produce cyclic groups. These groups are volatile and elute from the column as column 'bleed'. The silphenylene units within the 007-1MS backbone act as heat sinks and limit the formation of the cyclic groups normally associated with polysiloxane degradation. 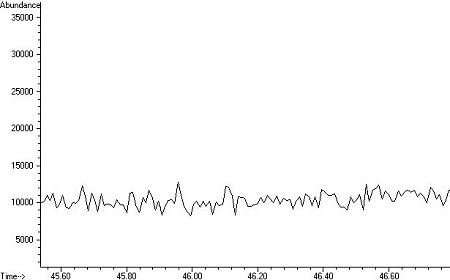 While a typical methylpolysiloxane bleed spectrum shown below in Figure 4. yields high abundance's of ions with m/z 207, 281, 355, the mass spectrum of the 007-5MS silphenylene column (above, Fig. 3.) yields significantly lower abundance of these ions. Additionally, it is apparent from Figure 3 that there is a reduction in the total number of ions resulting in "cleaner" spectrum and less background interference.

007-5MS Silphenylene Polysiloxane columns are available in all standard column I.D.'s and in limited column lengths. The film thickness ranges are noted in the chart below.