For laboratory or mobile field testing applications where space and versatility are critical, choose the Environmental GC. Equipped with Method 5035 compliant Purge & Trap, PID, and FID/DELCD detectors, it will easily generate certification quality data for EPA Methods 8021, 8010, 8015, TO-14,and many others.

With the optional Thermal Desorber, you can quickly screen for pesticides, PCBs, diesel, and other semi-volatiles. The standard on-column injection port allows syringe injection as well, and a second injector may be installed if desired.

If you are going out into the field, heading off into the jungle, or just need a compact GC for the lab, this GC equips you with the hardware to cover almost every analytical situation.

For users who do not need the chlorine/bromine selective DELCD detector, the same GC configuration minus DELCD is available as the BTEX GC.

The chromatograms at right simultaneously displayed in PeakSimple, are from an analysis of Method 8021 standard + gases on an SRI Environmental GC system. Peak identities can be confirmed by comparing the results from the three different detectors. Peaks which often co-elute, such as benzene and carbon tetrachloride, can still be measured since the PID responds only to the benzene, while the DELCD only responds to the carbon tetrachloride. 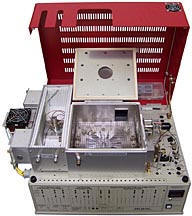