The SRI TCD detector consists of four tungsten-rhenium filaments in a Wheatstone bridge configuration. Electric current flows through the four filaments causing them to heat up. Carrier gas ( typically helium which has very high thermal conductivity ) flows across the filaments removing heat at a constant rate. When a sample molecule with lower thermal conductivity exits the column and flows across the two sample filaments, the temperature of the filaments increases unbalancing the Wheatstone bridge and generating a peak as the sample molecules transit through the detector.

The TCD detector is useful because it detects all molecules, not just hydrocarbons, so it is commonly used for fixed gas analysis ( O2, N2, CO, CO2, H2S, NO, NO2, etc. ) where the target analytes do not respond well on other more sensitive detectors.

The TCD is able to detect concentrations from 100% down to about 100 ppm, but not lower. Even 100 ppm is only possible where the chromatography permits a sharp peak on a flat baseline. Where the peak is broad or the baseline is not perfectly flat, detection limits of 300 ppm are more realistic. For lower detection limits, the HID detector may be more suitable for inorganics, and of course the FID provides 1 ppm detection for hydrocarbon species.

The SRI TCDs use easily replaceable filaments which allow user replacement in the event of a filament burn-out. A filament protection circuit prevents filament damage by disabling the current if carrier gas pressure is not detected at the GC, but cannot prevent filament damage under all circumstances.

Fourteen detector combinations are available for mounting on the SRI Models 8610C and 310 GC mainframes.You can also upgrade your current GC or add more analytical power to your lab with these detectors as Stand-Alone units on the Model 110 detector chassis. 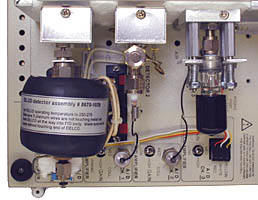 Up to six detectors may be mounted along the right hand side of the 8610C GC's column oven and used simultaneously (although some rare combinations of detectors may conflict because of space limitations). Each detector is equipped with a thermostatted heater block for temperature stability, electronic pressure controlled (EPC) support gases, such as hydrogen and air for the FID, and internal amplifier electronics. Select your detector type(s) based on your particular measurement application, detection limit required, matrix interferences, and/or regulatory guidelines.